I got the new board in the water this weekend. After painstaking hours, a frustrating re-glass incident and a shit resin swirl, I finally got the Bastard Fish wet.

The swell was big-ish and was either maxing out, or  missing most locations on the South Coast. I recently joined up with the UniSA Boardriders Club and this weekend I put the word out that I was going down, with an open invitation for anyone to join me. Only Katie, the Prez, was up for the dawn patrol.

We met up at the Parsons carpark just in time to see a set close down the whole beach. Nup. Next stop was Shiton. Nup. So, with few remaining options, we ended up at Middleton on the “we came all this way so we might as well get wet” defence.

As is its wont, Dribbleton was all over the place, but there seemed to be a bit of a consistent bank up around the point (it’s all relative), so that’s where we headed. Middleton’s not usually that challenging to get out, but at that size, if you get hit by a set at the wrong time, it turns out that it can be a real bastard. But we eventually made it out the back and sat back to wait.

Middleton is an annoying wave. It promises a lot, but doesn’t deliver nearly as much. You pretty much have to take off under the breaking lip, otherwise it just fattens out and fades away, leaving you frustrated and, because of the brown algal bloom that hugs the point, slightly soiled.

But eventually we both got a couple and all of a sudden all the frustration just seemed to melt away. Funny how that happens. 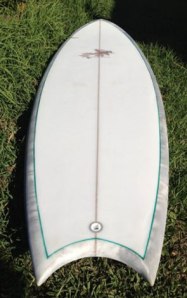 The board paddles well. Even though at 6ft it’s relatively short, it’s wide and thick where it counts, so has plenty of buoyancy. This width also helps with stability on take-off. I felt unreasonably confident taking off, which can only be a good thing. Let’s see if that carries over to smaller, steeper waves, where I won’t have as much time to get to my feet and choose a line…

To be honest, I think it was actually a bit too big for this board to show off all it’s capable of. It’s only little, and for the most part I was just skipping down or across the face of the waves. At one point I hit a lump of chop going down the face of one wave and got thrown arse over turkey before I had a chance to compensate.

But it was fun.

It turns effortlessly. I had relatively large fins in, which helped to handle the size I think. I’m looking forward to getting it out in 2-3 foot waves, rather than the 4-5 foot mushburgers we were contending with on Sunday. That will be the real test.

So to conclude – Overall I’d say my impression was good, but I need to get it out in waves more suited to the design to really find out what this board has to offer.